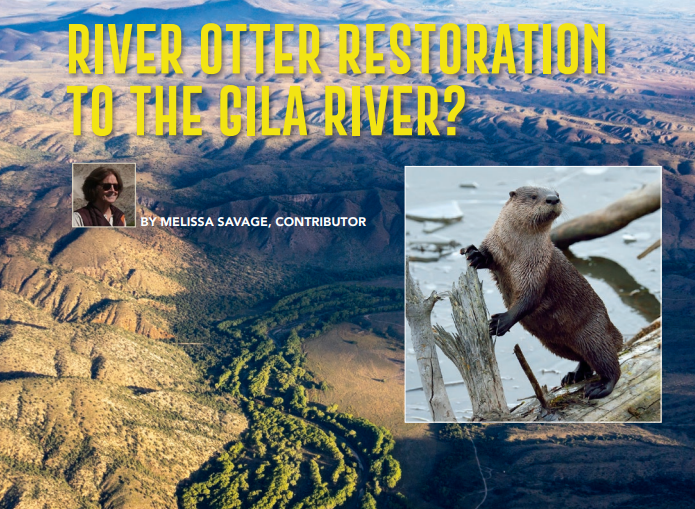 The lively, rambunctious river otter is native to New Mexico. However, the last naturally occurring animal in the state was killed on the Gila River near Cliff in 1953. As the top predator in our aquatic systems, otters play a key role in structuring healthy river ecosystems. Now that the Upper Rio Grande has a thriving population of reintroduced otters, the Gila River is the next site to be repopulated.

In 2006, the New Mexico Game Commission unanimously approved a plan to reintroduce river otters into the Upper Rio Grande and Gila River watersheds. And from 2008 to 2010, 33 otters from Washington state were released into a tributary of the Rio Grande on Taos Pueblo land. The Rio Grande population is now thriving, with around 100 otters delighting river runners, visitors and otter watchers.

But in 2011, the commission voted to pause release of river otters into the Gila River until there was more information on potential impacts of otters on endangered species. New reports, including a thorough biological assessment of the potential effects of Gila otter restoration and a review of fish population studies, are now completed. The Game and Fish Department is still very cautious, and an otter restoration is not planned in the near future.

Otter predation may very well have a beneficial impact on threatened and endangered fish species in the Gila River. The absence of otters has allowed the proliferation of nonnative fish and nonnative crayfish. Crayfish are especially destructive, eating small fish, fish eggs and vegetation, and have been identified as one factor in the decline of threatened and endangered species. The decline of the endangered chub species in the Gila, for example, can be attributed mainly to nonnative fish species like catfish and bass. Otters typically eat larger, slower nonnatives like common carp, suckers, catfish and bullhead.

Restoration of river otter to the Gila River system in New Mexico would have numerous benefits, ranging from improving ecosystem integrity to conservation of other native aquatic species. The restoration of otters has been highly popular throughout the state, supported by river runners, hikers, children, ecologists, trappers, visitors and anglers. Sightings of otters have already brought pleasure to scores of people along the Upper Rio Grande. River otters are part of our state’s natural heritage and their restoration to the Gila River would be welcome.