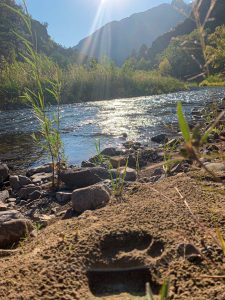 American Rivers, a Washington, D.C.-based conservation organization, ranked the Pecos River No. 5 in its new report on the nation’s most endangered waterways — largely due to the threat of a potential new mining operation.

With a rich cultural history and heavy influence on local wildlife and recreation, the Pecos River is crucial to protect, the organization said in its 2021 report, released Tuesday.

Local environmental groups have opposed a proposed mining operation in Santa Fe National Forest near Terrero, which one advocate described as “the nail in the coffin” for the river.

Mike Fiebig, director of the Southwest River Protection Program for American Rivers, said waterways chosen for the list are those facing immediate threats with opportunities for change in the coming year.

The Pecos River has been devastated by contaminants in the past.

A heavy snowmelt in 1991 washed toxic pollutants from the shuttered Terrero Mine into the waterway, killing more than 90,000 fish and resulting in a $20 million cleanup, according to American Rivers.

Comexico LLC, a Colorado subsidiary of Australian mining company New World Resources Ltd., proposed the Tererro Exploration Project in 2019 and has an application pending before the New Mexico Mining and Minerals Division. The company plans to mine more than 5,000 acres, drilling up to 30 holes, 4,000 feet deep, in search of ore for metals like copper, zinc, lead and gold.

“This is a river that was damaged in the past, was restored, is sacred to a number of people and culturally important — and important for wildlife,” Fiebig said.

The organization’s goal, he said, is “basically preventing the past from repeating itself.”

Frank Adelo, president of the Upper Pecos Watershed Association, said the Comexico project would be the biggest mining operation since the Tererro Mine in the 1930s, which resulted in nearly 2 million tons of ore being removed. Comexico is looking at mining up to 5 million tons of ore, he said.

“I’m born and raised here,” Adelo said. “There’s enough challenges on this river with climate change and what we’ve seen with catastrophic wildfires in the past few years, diminished snowpack, etc. This would be the nail in the coffin if they were ever to develop a mine of this size.”

Advocates are calling for the state Mining and Minerals Division to deny the exploratory mining application and are urging the U.S. Forest Service to assess the environmental impacts of the mining proposal. They also have asked state lawmakers to pass legislation to permanently protect the river.

Gov. Michelle Lujan Grisham wrote a letter to the head of the U.S. Forest Service in 2019 stating she was “deeply concerned” about the mining project’s potential impacts.

“The importance of the river from a recreation point and from a spiritual standpoint was certainly made clear this past year,” Adelo said.

“The only solution really is no mine at all.”