Chaco Canyon is the center of a vast, ancient Puebloan society that encompassed tens of thousands of people across four 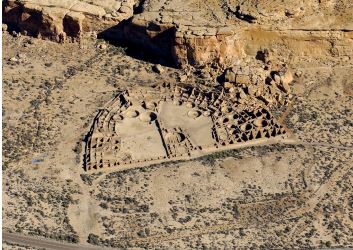 modern states in the American Southwest. At a special event at Chaco Culture National Historical Park in November 2021, Secretary of the Interior Deb Haaland announced that 351,000 acres of Federal surface lands in a 10-mile zone around Chaco, in the Greater Chaco Landscape, would be withdrawn from oil-gas leasing for 20 years. A 90-day review period was announced in January 2022 and will continue until April 7.

This move will offer long-term protection for these lands and provide a protective buffer for thousands of fragile cultural resources and historic sites within and beyond Chaco’s boundary.

The significance and importance of the 10-mile zone revolves around its values—spiritual, archaeological,
and scientific.

Chaco Canyon and the surrounding Greater Chaco Landscape constitute a living cultural and ancestral landscape of great spiritual significance to the Pueblo Tribes of New Mexico and the Navajo Nation. The Pueblos trace their ancestry to Chaco’s many ceremonial and sacred sites, and Pueblo ancestors have lived and practiced ritual within Chaco’s boundaries and across the Greater Chaco Landscape for thousands of years. Navajo residents of Greater Chaco have enduring ties to this landscape, as well, and the Pueblos and the Navajo Nation identify many traditional cultural places here.

In addition to years of previous work, archaeological survey and reconnaissance work by Archaeology Southwest in 2020 revealed more than 4,000 archaeological and historic sites in the northern portion of the protective zone. These places were created by diverse groups— including Paleoindian, Archaic, Puebloan, Navajo, Jicarilla Apache, and others—in time periods from about 10,000 BCE to the present.

Because less than 20 percent of the area enclosed by the 10-mile zone has been archaeologically surveyed, the actual site count is undoubtedly much higher.

Other than the Pueblo of Acoma’s 2018 project with Archaeology Southwest, little recent ethnographic work has been undertaken with any Tribal groups. Dozens of traditional cultural properties (TCPs) were revealed during the Acoma Project within the 10-mile zone, indicating there are probably hundreds, if not thousands, of TCPs and other Tribal cultural sites as yet unidentified across Greater Chaco. Current, ongoing cultural studies by the Chaco Heritage Tribal Association—a coalition of Pueblo groups—and the Navajo Nation will add immeasurably to our understanding of the 10-mile zone and the Greater Chaco Landscape.

Beyond the specifics of TCPs, sacred sites, cultural and historic sites, other scientific aspects of the Greater Chaco Landscape attest to its significance, including the Chaco Park’s International Dark Sky designation and the incredible viewsheds and soundscapes Ruth Van Dyke and other archaeologists are only beginning to document. Additionally, the 10-mile zone encompasses much of the Park’s viewshed, and visitors are able to view and appreciate the significance of the largely-undeveloped landscape surrounding the Park from Pueblo Alto, Pueblo Pintado, and several other locations.

These values plainly underscore that the 10-mile zone of protection is not arbitrary. The 10-mile zone contains irreplaceable ancient and historic sites and communities that merit greater protection than BLM and BIA regulations currently provide. This reinforces the need for permanent withdrawal of the 351,000 acres in Secretary Haaland’s order, as well as the need for legislation to permanently remove the threat of future oil-gas development from this land.

The high value associated with Chaco Park and the surrounding Greater Chaco Landscape makes clear that much stronger protection is needed.

Oil-gas activity has had a significant impact across the landscape, and specifically to the area around the Pierre’s Community, which lies at the edge of the 10-mile zone. In fact, according to leading researchers, oil-and-gas activity has transformed the Pierre’s Community into an “industrial park” and “destroyed” stretches of Chaco’s Great North Road (which runs from the site of Pueblo Alto 35 miles to the north) outside of the 10-mile zone. Other communities in the 10-mile zone have thus far seen less impact, and, for this reason, require the heightened protection that will come from a Federal mineral withdrawal.

As of early 2020, 91 percent of Federal lands in the BLM’s Farmington Field Office boundary had been leased. Nearly half of the remaining 9 percent lies within the 10-mile zone, emphasizing the great need to take these lands off the leasing table.

Another important consideration—aside from critical concerns about the protection of fragile cultural and historic sites—is the fact that the development potential for oil-gas resources in the area is low to moderate. Areas of much greater potential to the north and northeast of the 10-mile zone were developed for Mancos Shale production more than a decade ago. Unleased Federal lands in the 10-mile zone have not been leased to date, in large part because they have limited potential. There is every reason to permanently protect these lands, and no reason not to.

This article was written by Paul F. Reed, Archaeology Southwest