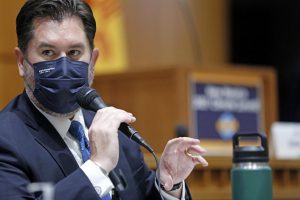 As climate change makes its early impact in New Mexico with depleted rivers, increased wildfires and a drier landscape, everyone must pull together to avoid the most dire forecasts while ensuring minority communities and poorer residents aren’t left behind.

That was the central theme echoed by political leaders, scientists, conservationists and community activists Monday at the New Mexico Climate Summit, which delved into how to cut greenhouse gas emissions that trap heat in the atmosphere.

Gov. Michelle Lujan Grisham called for making the state’s 2050 net-zero emission goal a law in the upcoming legislative session — a declaration that pleased climate advocates and alarmed some in the fossil fuel industry.

“If you don’t have that framework in statute, it’s too easy to not work as diligently or as quickly or as effectively — to not have future commitment,” Lujan Grisham said. “This should be indicative of the work we’re going to do to preserve future generations.”

That legislative effort, if carried out, wouldn’t affect the shorter-term goal in the governor’s 2019 executive order to cut carbon emissions by 40 percent by 2030.

In a statement, an environmental group, which pushes to slash fossil fuel emissions, praised what it called the governor’s bold edict.

“By putting net-zero greenhouse emissions by 2050 into law this coming year, New Mexico and the governor will continue to lead the country toward a livable climate and a just transition,” said Camilla Feibelman, executive director of the Sierra Club’s Rio Grande Chapter. “We know New Mexicans want bold, just climate solutions and 100 percent clean energy.”

But industry advocates denounced the idea in a statement, saying it would hurt the state’s economy and residents.

“The proposals put forth by the governor today will do nothing more than increase the green tax on New Mexico’s working families,” said Larry Behrens, director of nonprofit Power the Future’s Western states chapter. “It’s incredible to hear the governor and her eco-supporters celebrate policies that are causing energy prices to skyrocket both in Europe and here at home. Our families deserve ideas that are based in reality, not failed ideology.”

Still, an Occidental Petroleum representative who sat on a conference panel said he becomes frustrated with oil and gas operators making statements on how climate solutions will come at the expense of the industry.

“For example, my industry has no future in a net-zero world,” said Al Collins, vice president of public policy at Houston-based Occidental. “Or that high-paying jobs are going to be lost to low-paying jobs when we transition to a clean economy. I just think that’s an outdated idea.”

Throughout the conference, speakers spoke of the need to make an energy transition that’s equitable for all communities, including Indigenous, Hispanic, rural and others whose members are heavily dependent on oilfield jobs.

“The transition is coming,” said Maite Arce, founder of the Hispanic Access Foundation. “If we don’t do it right, the same people — the usual suspects — will benefit, and the same people, the same communities, will be left behind. We must protect the working people’s jobs, their homes, their livelihoods and walk with them through this change.”

That will require building trust and connecting with community leaders to draw on their wisdom for how to get through the transition, Arce said, adding: “After all, they know what’s best for their communities.”

One of the biggest arguments against pushing too hard or too fast to move the state away from fossil fuels is the massive yearly revenue the industry puts in state coffers. Estimates vary from $1.6 billion to $2.6 billion.

Several speakers at the summit said the state must end such heavy dependence on an industry that emits a large portion of the state’s greenhouse gases.

“We have got to put everything we can as a state government behind creating a robust private sector that is focusing on the green economy,” said state House Speaker Brian Egolf, who helped organize the conference. “We want to not be in a position where 40-plus percent of our state budget has a single industry.”

At the moment, some of these trends are tied to short-term drought rather than climate change, but they are a harbinger of what’s to come in the next 40 or 50 years, DuBois said.

Ilissa Ocko, climate scientist with the Environmental Defense Fund, said warmer temperatures cause greater evaporation, leading not only to more water in the atmosphere but torrential rains on the dried-out soil.

Methane, a key component of natural gas, has caused a quarter of global warming, Ocko said.

Scientists have determined methane is 28 times more potent than carbon dioxide in warming the atmosphere over a 100-year period.

But methane only lingers for a decade, much less time than carbon dioxide, which can hang around for 300 to 1,000 years. If methane emissions are phased out, that will go a long way in slowing climate change, Ocko said.

However, it is equally important to eliminate the longer-lasting carbon dioxide pollution, she added. The oil and gas industry emit about half the state’s methane and one-third of the carbon dioxide, she said, adding technology should be employed to capture it.

Lujan Grisham and other state officials touted the regulations, policies and laws that were put in place during her tenure to combat climate change, such as the electric vehicle tax credit and the Energy Transition Act, which requires investor-owned utilities to produce 50 percent renewable energy by 2030.

But they all agreed there was more that should be done.

State Senate President Pro Tem Mimi Stewart, D-Albuquerque, said regulatory agencies must be fully funded to carry out the governor’s climate goals, such as the net-zero emissions by 2050.

“We hobble them by not adequately funding them,” Stewart said.

This article originally appeared in the The Santa Fe New Mexican.