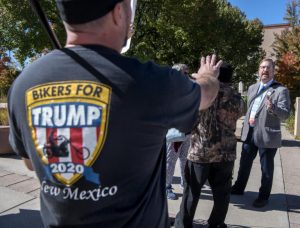 At New Mexico’s first climate summit on Monday, Gov. Michelle Lujan Grisham called on the Legislature to codify a commitment to net-zero carbon emissions across every sector of the state’s economy by 2050.

The governor issued an executive order in January 2019 setting similar goals but wants those targets spelled out in state law.

“If you don’t have that framework in statute, it’s too easy to not work as diligently or as quickly or as effectively,” Lujan Grisham said.

A similar bill was introduced in the regular session in January, but was never heard outside of a House committee.

The announcement reflects the “critical importance” of reducing emissions, said Jon Goldstein, a regulatory and legislative affairs director with the Environmental Defense Fund.

“You don’t have to be a climate scientist to see how extreme drought is affecting New Mexico,” Goldstein told the Journal. “Wildfires are affecting this state, as are the lack of snowpack and water for irrigation, and we need to act.”

Bills to set clean fuel standards and establish New Mexico as a hydrogen hub will also be on the governor’s call for the next legislative session.

The two-day summit, hosted by House Speaker Brian Egolf, brought elected officials and renewable energy advocates to the Roundhouse for discussions on supporting communities as the state transitions away from an oil and gas economy.

New Mexico is expected to collect $8.8 billion in revenue in the coming budget year, including a $1.4 billion budget surplus driven by oil and gas production.

Egolf said New Mexico should direct that money to “green” private sector industries that are shielded from boom-and-bust financial cycles.

“Taking risks must be part of our plan, and not something that we shy away from,” Egolf said.

“If you’re going to achieve net-zero, there’s going to be some (emissions) that just can’t be eliminated,” Collins said. “So we need technologies that will create carbon reduction credits.”

Theresa Davis is a Report for America corps member covering water and the environment for the Albuquerque Journal.

This article originally appeared in the The Albuquerque Journal.