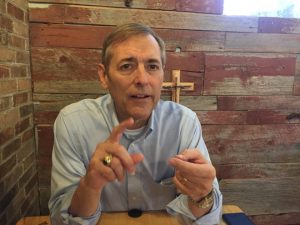 Greg Zanetti, Republican candidate for New Mexico governor, believes New Mexico could be a leader in energy development with new leadership in Santa Fe in 2023.

He is one of six Republicans seeking the nod to face Democrat incumbent Michelle Lujan Grisham in next year’s race for New Mexico’s chief government executive.

Primary elections in New Mexico are set for June 7, 2022. The Republican winner faces Lujan Grisham in the general election on Nov. 8, 2022. Zanetti visited Carlsbad and Artesia Oct. 20 and Oct. 21 and touted energy development in Eddy County.

“Oil and gas, we must promote it, we’ve got to get government off the back of oil and gas and quit vilifying it,” he said during a meet and greet in Artesia on Oct. 21.

“The oil and gas industry is sending so much revenue to the State of New Mexico and New Mexico seems to say, ‘thanks for sending the money’ and then they badmouth and treat the industry so poorly.”

He believes in two kinds of wealth.

“There’s wealth from the Earth like oil and gas, timber, copper and iron. We all know the potential, but yet we’re not using it,” Zanetti said.

He said the other kind of wealth comes from human hands.

“It’s taking aluminum and making an airplane. It’s my computer, my cellphone, my car. That’s all wealth to me. I call that high tech,” Zanetti said.

He said modern computer age technology was born in New Mexico. Zanetti said the state has a problem chasing items that are outdated.

“We’re still chasing Google,” he said. “Google started in 1995. It’s old. The new stuff that is coming is what we should be chasing after.”

“You need to make those two changes and watch what happens here in a state that’s got wealth from the Earth and wealth from human hands and you combine these two, watch New Mexico go from worst to first.”

Zanetti said southeast New Mexico was a prime example of using wealth from the Earth and wealth from human hands regarding oil drilling.

“They figured how to go two miles down, shoot across horizontally and bring up oil. Talk about a merger of wealth from the Earth and wealth from human hands. The example is right here. This is the template,” he said.

Zanetti describes himself as a constitutional conservative and believes government control in New Mexico belongs to counties and municipalities and not the state.

Zanetti grew up in Albuquerque and graduated from Valley High School in 1976 and from the U.S. Military Academy in 1980.

He was a Brig. Gen. in the U.S. Army and has served as a financial advisor in Albuquerque.

Mike Smith can be reached at 575-628-5546 or by email at MSmith@currentargus.com or @ArgusMichae on Twitter.