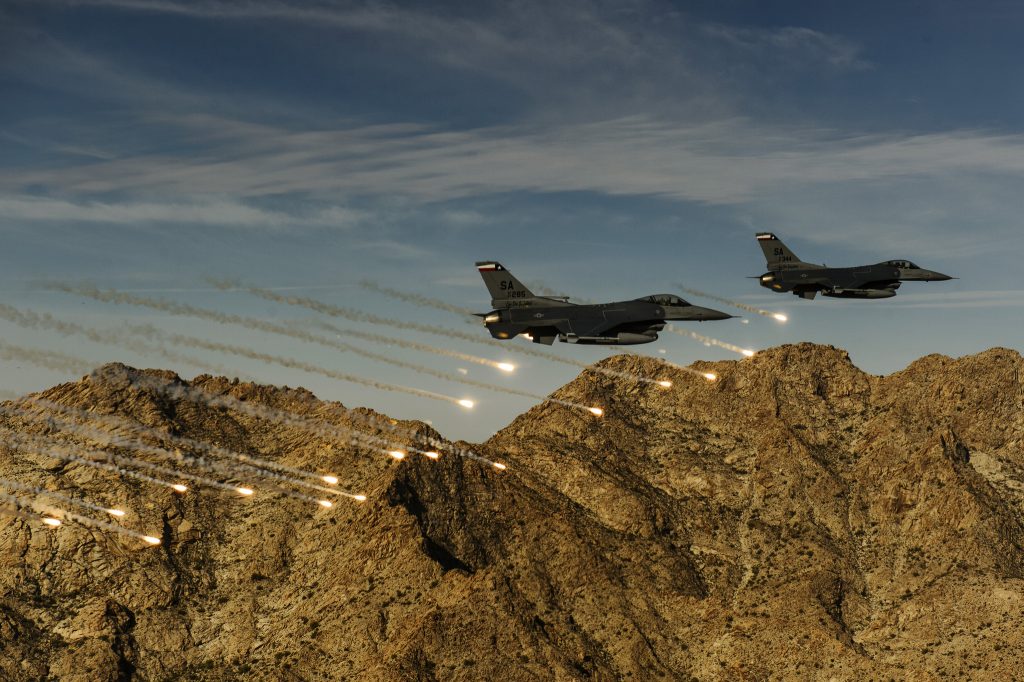 Headquarters, U.S. Air Force has prepared a Final Environmental Impact Statement (EIS) to assess the potential environmental effects of optimizing the F-16 pilot training airspace for Holloman AFB (HAFB), New Mexico. The Final EIS addresses comments received during the Draft EIS comment period and identifies Alternative 1: the expansion of the Talon military operations area (MOA) near HAFB as the Preferred Alternative. Other than a “no change” alternative, this was the preferred alternative advocated for by New Mexico Wild and Gila-area conservation and business interests.

This news regarding the expansion of military pilot training airspace issued today by the Air Force is a victory for the greater Gila region, and public lands in the Rio Grande Valley from Socorro to Las Cruces. Although the Air Force had publicly acknowledged that the current airspace was adequate to successfully conduct additional F-16 pilot training, the Air Force had proposed an expansion of airspace that would have exposed the Gila and Aldo Leopold Wilderness Areas, as well as other beloved public land destinations like portions of the Organ Mountains-Desert Peaks National Monument, to the threat of wildfires, extreme noise pollution, disruption to wildlife, and environmental contamination. The proposal would have resulted in 10,000 additional flyovers annually, including low altitude overflights, at 500 feet above the national forest and 2,000 feet above designated wilderness. The proposal would have allowed discharging 15,000 magnesium flares and 15,000 toxic “defensive chaff” each year. The proposed expansion over the Gila region was opposed by local governments, businesses, aviators, outdoor enthusiasts, and community members.

However, after concluding a public planning process in early 2020, Air Force leaders have announced the preferred alternative that will have the least negative impact on wilderness, wildlife, public lands, and the outdoor recreation economy. New Mexico Wild worked with our partners, US senators, and DOD officials and insisted the military host public meetings in Silver City. Community organizing efforts resulted in over 500 people attending a public meeting at the Grant County Convention Center in November of 2017 and thousands of official written comments submitted to the Air Force.

At that time, New Mexico Wild member and Grant County resident Brett Myrick stated that “As a veteran, and former Navy SEAL, I know that the readiness of our nation’s military is a top priority, including for those of us here in southern New Mexico.  But this is exactly the wrong place for screaming jets and incendiary devices. People live and visit here because of the peace and quiet of our public lands. This would ruin what I love most.”

“New Mexicans respectfully sent a loud and clear message that the places we visit to find solitude and enjoy nature are not appropriate for military combat training. Today’s announcement by the Air Force reaffirms the notion that constructive public advocacy can lead to positive outcomes,” said Mark Allison, Executive Director at New Mexico Wild. “We greatly appreciate the important role Holloman Air Force Base plays in our national security, and salute Defense Department officials for honoring their commitment to a fair and open public process, for hearing community concerns, and for ultimately reaching the correct decision.”

“Hundreds of local citizens turned out, telling the Air Force how special the wild Gila is and why it should be protected,” said Todd Schulke, co-founder of the Center for Biological Diversity. “This is one of the rare cases during the Trump era where the process worked and the Air Force actually listened to the concerns of communities in the Gila area.”

“Thank you to our elected officials who listened to our community’s concerns over the potential for serious impacts to our environment, our public lands, and local economy from the Holloman proposal,” said Allyson Siwik, Executive Director of the Gila Conservation Coalition. “We are grateful for the Grant County Commission, and town councils from Silver City, Bayard, Hurley and Santa Clara, as well as Senator Martin Heinrich, Senator Tom Udall and Lieutenant Governor Howie Morales for stepping up to oppose this harmful idea.”

The alternative that the Air Force ultimately chose will expand the existing Talon Military Operation Area (MOA) that Holloman currently uses over southeastern New Mexico, east of Alamogordo, where military aircraft have trained intensively for a long time. Senator Martin Heinrich and recently retired Senator Tom Udall have been outspoken proponents of choosing the alternative with the least negative impacts on nature, public lands, and the communities of southern New Mexico.

“Veterans groups have been strong allies of ours in conserving public lands,” said Allison. “They know that public lands offer solace and healing for many returning combat veterans. How ironic and devastating it would have been to take this away from them. We honor the service of all those in uniform. We also think protecting America’s first Wilderness is patriotic and are relieved that the Air Force came to the same conclusion.”

The Gila Wilderness, established in 1924, was the world’s first federally designated wilderness area and is home to an abundance of endangered and threatened wildlife species, cultural sites, and New Mexico’s last free-flowing river, the Gila River. The Gila Wilderness is also a beloved destination for traditional users and outdoor enthusiasts, propping up the local economy in nearby communities like Silver City. The Organ Mountains-Desert Peaks National Monument was established in 2014 after years of grassroots advocacy by New Mexicans.

The Final EIS release initiates a 30-day Waiting Period before the Record of Decision (ROD) is signed.