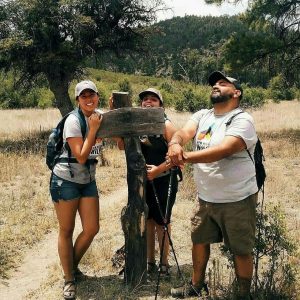 “A board or a community organization should reflect the community that it’s in.”

Simon Sotelo’s entire approach to community organizing can be summed up in this statement. New Mexico Wild’s Community Grassroots Organizer takes pride in his southwestern New Mexico roots as part of a family that has called the Mimbres Valley home for multiple generations.

As we wrap up National Hispanic Heritage Month, we are thrilled to highlight Simon’s contributions to ongoing efforts to protect New Mexico’s public lands and wild places.

Currently living in Silver City, Simon’s connection to his community has been instrumental in several conservation accomplishments in recent years. Simon has been front-and-center on a locally-driven proposal to protect the Gila, San Francisco, and East Fork of the Mimbres Rivers through Wild and Scenic designations.

Thanks to his standing as a trusted member of the community, Simon has helped secure resolutions and letters of support of a Wild and Scenic Gila River from numerous local civic organizations, small businesses, and government bodies. 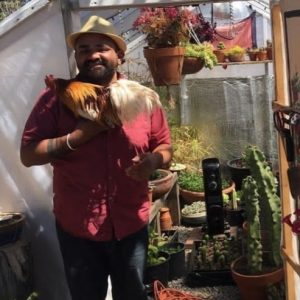 “For me, the grassroots is literally what it means,” Simon told New Mexico Wild Executive Director Mark Allison in the fall of 2019. “It’s starting from the bottom up, it’s starting with the community on the ground to make change, to mobilize them and to get them involved in the conversation.”

Simon’s ability to involve his fellow residents in conversations about protecting the lands and waterways they cherish helped pave the way for Senators Tom Udall and Martin Heinrich to introduce legislation to designate nearly 450 miles of the Gila, San Francisco, and East Fork of the Mimbres Rivers as Wild and Scenic in May 2020. The bill is already working its way through the legislative process, receiving its first hearing in a Senate subcommittee this September. This rapid progress would not have been possible without Simon’s countless contributions.

In addition to his work on the Wild and Scenic proposal, Simon is constantly spreading his knowledge of conservation in Grant County and beyond. For the last two summers, Simon has taken a leading role in New Mexico Wild’s involvement in Latino Conservation Week. While public health orders made in-person events difficult this summer, Simon adjusted, hosting a virtual opening of a public lands-themed art show in Silver City and an Instagram scavenger hunt on a popular hiking trail.