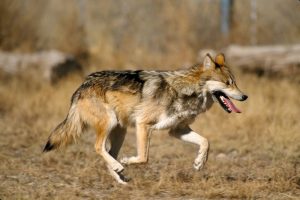 The U.S. Fish and Wildlife Services finalized its Mexican Wolf rule that removes the cap on the population size within the experimental range and focuses on increasing genetic diversity by limiting when wolves can be killed and through releases of captive wolves into the wild using methods like cross-fostering.

Immediately after the rule was published in the Federal Register, wolf advocacy groups like WildEarth Guardians, New Mexico Wild, Western Watersheds Project, the Western Environmental Law Center and the Grand Canyon Wolf Recovery Project notified the Fish and Wildlife Service that they plan to sue the agency, calling the finalized rule a failure to adequately protect the Mexican gray wolf, which is also known as the lobo.

“The Service is once again ignoring the science and its clear legal mandate to manage Mexican wolves in a manner that allows for the true recovery of this critically imperiled species,” Kelly Nokes, Shared Earth Wildlife Attorney for the Western Environmental Law Center, said in a press release. “We stand ready to once again hold the agency accountable for failing to comply with the Endangered Species Act’s strict conservation commands.”

These groups were also involved in a previous suit that led the Fish and Wildlife Service to revise its 2015 rule, resulting in the new rule published Friday. They say that this rule perpetuates some of the same problems that the 2015 rule had, including continuing to classify the wolf population as “nonessential.”

“It’s unfortunate that we’re caught in this legal ‘lather, rinse, repeat’ because the Service is refusing to comply with the law that requires recovery of the Mexican wolf based on the best available science,” Greta Anderson, deputy director of Western Watersheds Project, said in a press release. “The agency has known for a long time what the lobos need, but they apparently would rather have the courts tell them what to do, so here we are again.”

During a press conference on Thursday, the Fish and Wildlife Service explained that decision by saying that the wolves in captivity and the population in Mexico are enough to keep the species from going extinct if the population of Mexican wolves in the wild in Arizona and New Mexico was not there.

But advocacy groups say that classifying the population as non-essential is wrong because it relies on the cooperation of private breeding facilities that do not have any legal obligation to recover the wolf subspecies as well as a small population of wolves living in Mexico.

“The US government shouldn’t be relying on Mexico to recover endangered species in the US, we have no authority or control over what happens to those,” Chris Smith, southwest wildlife advocate for WildEarth Guardians, said.

Sally Paez, a staff attorney for New Mexico Wild, said classifying the wolf population as non-essential leads to different management decisions, which could involve allowing more risks to the wolves.

Additionally, while the finalized rule restricts killing of wolves, the advocates describe it as only a temporary reprieve and say the rule does not include provisions to address poaching, or illegal killings.

While the rule restricts killing, it also includes provisions that will allow permits to be issued to kill wolves if certain targets intended to meet genetic diversity goals are met.

The groups also took issue with the use of cross-fostering to increase genetic diversity. Smith explained that cross-fostered wolf pups have a lower survival rate and, even if they do reach sexual maturity, there is no guarantee they will breed. He said only two or three wolves in any given pack breed. That means the valuable genetic diversity may not actually be injected into the wild wolf population because the cross-fostered wolves could die without ever having reproduced.

Aislinn Maestas, in an email response to NM Political Report’s questions, said that cross-fostering is the preferred method because adult wolves released into the wild could lead to problems.

“Release of adult wolves has shown success but is not without challenges. Most of the nuisance behavior documented in this population is exhibited by wolves recently released from captivity,” she said. “Wolves are territorial, and releases of new packs needs to occur in areas not already occupied by wild wolves. This population is expanding and much of the unoccupied areas are also places where stakeholders and those living and working on the landscape have not yet experienced wolves. Rather than putting wild-naïve wolves in places where people have not yet had experience with wolves, we can place young pups (5-15 days old) into existing wild dens to be raised in the wild by experienced wolves. Fostering eliminates the nuisance behavior we document with releases of adult wolves, puts wolves into areas they are already, and is a more supported method amongst our partners and stakeholders of introducing important genes into the wild population.”

Paez said measuring genetic diversity through a goal of having 22 captive-born wolves reach sexual maturity, or approximately two years of age, does not provide a true picture of genetic diversity because it does not look at whether those wolves actually reproduced.

“One of our big concerns with that provision is that this number, 22, is not linked to actual genetic diversity,” she said.

The groups say that if the Fish and Wildlife Service does not address what they deem are shortcomings in the final rule, they will file a complaint in federal district court.

“It’s exhausting and frustrating that the only way we get positive federal action for these wolves is by doing this over and over again,” Smith said. “We sue them and the court sides with us and then the service does the minimum to try to comply with the court order and then we sue them again.”

He said the “perpetual cycle of litigation” costs the taxpayers and the Fish and Wildlife Service could end it by following the best-available science.

The 2018 court ruling that required the Fish and Wildlife Service to redo the rule did not require the agency to address the northern population boundary of Interstate-40, though advocacy groups would like to see the wolf range extend northward. The northern boundary remains in the finalized rule published Friday, but it could change in the future if the Fish and Wildlife Service’s evaluations of habitat needs, including five and ten year reviews, deem it necessary.

During the press conference, Amy Lueders, the southwest regional director for the Fish and Wildlife Service, gave an update on the wolf population. She said the population saw six consecutive years of growth and has a minimum of 196 individuals in the wild.

“The population is the largest it’s ever been, having doubled in size since 2015,” she said.

Additionally, 11 captive-born pups have been placed in wild dens.

Lueders said catastrophic wildfires have burned in the wolf habitat.

“Our initial reports show that wolves in the fires’ path have survived and we do not expect population decline as a result,” she said.

“In the first few years following a wildfire, flushes in early successional stages of vegetation (that is, the vegetation that first appears) typically result in an increase in wild ungulate populations, which would increase the prey available to Mexican wolves,” she said in an email.

This article originally appeared in The New Mexico Political Report