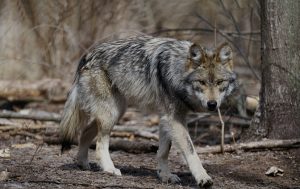 New federal rules governing the recovery of Mexican gray wolves, known as “lobos,” in New Mexico were immediately challenged after being enacted last week as environmentalists criticized the regulations as inadequate to save the species from extinction.

A group of New Mexico environmental groups announced a lawsuit against the U.S. Fish and Wildlife Service last week, charging the agency with failing to comply with the Endangered Species Act in announcing multiple changes to the federal wolf recovery strategy.

The federal agency has 60 days to issue a finding in response to the groups’ objections, read the announcement, before they file an official complaint in federal court.

Changes to that strategy, which take effect Aug. 1, included removing the population limit of 300 to 325 wolves living within an experimental population area used for recovery in southern New Mexico and Arizona and setting a goal of an eight-year average of at least 320 wolves living in the wild.

The wolves were once thought to number in the thousands throughout the American West and parts of Mexico, but today only survive in a remote area of southern New Mexico and eastern Arizona.

The Service also enacted an objective of increasing the number of wolves released toward a goal of 22 surviving to the breeding age – about two years old – by 2030.

Records show an estimated 13 released wolves reached that age since 2017.

Restrictions were also placed on killing Mexican wolves on federal land to either remove them from the area, or in response to their impacts on wild herd animals like elk.

Amy Luders, southwest regional director with the U.S. Fish and Wildlife Service, said the changes would improve the wolf’s chances of survival, and provide balance between species conservation and local agriculture and livestock.

“This revision to the Mexican wolf rule ensures we are on the best path toward recovery while continuing to provide a variety of tools to manage for conflict on the landscape,” she said in a statement.

“We look forward to continued collaboration with our state, federal and Tribal partners in ensuring the experimental population contributes to long-term conservation and recovery while also minimizing impacts on livestock operators, local communities and other wildlife.”

But Sally Paez, attorney with the New Mexico Wilderness Alliance argued, along with other plaintiffs in the lawsuit, that the new rules did not go far enough in tracking genetic diversity of the wolf population in the wild while also lacking adequate restrictions on wolf killing.

“Mexican wolves evolved to play a critical role in the ecosystem, and they deserve a chance to thrive in the landscapes of the Southwest,” Paez said.

“After 40 years of recognition that Mexican wolves need a lifeline to survive, we urge the Fish and Wildlife Service to incorporate the best available science into its management rule to prevent the extinction of Mexican wolves and establish a viable, self-sustaining population in the wild.”

Southwest Wildlife Advocate Chris Smith with Santa Fe-based WildEarth Guardians said his organization and other repeatedly sued the federal government over its wolf strategy as wildlife managers have so far failed to enact adequate protections for the species.

In 2018, a federal court in Arizona ruled against revisions to the plan enacted in 2015, leading to this year’s alterations, calling for the removal of population caps and tighter restrictions on wolf killings.

Smith said the new rules still fail to protect the wolf from being killed by landowners and will not result in the genetic diversity needed for the species to survive and grow in the long-term.

“It is outrageous that, over and over, we have to sue the government agency tasked with recovering lobos in order to get them to act according to science, public interest, and the law,” he said. “But if that’s what it takes, we will go to the mat for these wolves. They are essential. And they belong.”

This article originally appeared in The Carlsbad Current Argus