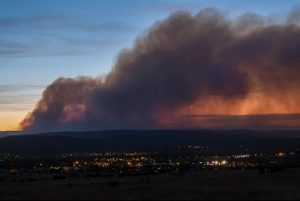 In moment of bipartisanship, New Mexico’s entire congressional delegation, Democrat and Republican, came out in support of two bills that would improve access to water in their state as it was ravaged by unprecedented wildfires throughout spring.

Both bills were introduced by Stansbury in the U.S. House of Representatives and had companion legislation in the U.S. Senate.

The Rio Grande Water Security Act would establish a federal program to improve conditions on New Mexico largest river and source of surface water, along with its tributaries like the Pecos River and throughout the Rio Grande Basin which encompasses most of New Mexico’s waters.

The Act would require the federal government to create a resource management plan for the Rio Grande, convene a working group and appropriate federal funds to irrigation infrastructure for Pueblos throughout the region.

“Water is life and the lifeblood of our communities,” Stansbury said. “As we face historic drought and wildfires, we must address the immediate needs of our communities while transforming water management across the West.”

She said the legislation was intended to see federal agencies partner with local leaders, landowners and others impacted by water scarcity.

“These bills will provide the essential resources and coordination we need to tackle our biggest water challenges, in partnership with our farmers and ranchers, acequia mayordomos, and communities who live these realities every day,” Stansbury said.

Herrell, the state’s lone Republican representative in Congress for its southern Second Congressional District, which was experiencing some of the state’s worst drought conditions and highest threats for wildfires said addressing drought would assist struggling ranchers and other sectors of New Mexico’s agriculture industry.

“The long-term health and viability of the Rio Grande is not a partisan issue,” she said. “Unless we take swift action, drought will continue to have negative effects on our communities, causing losses in crop yields and forcing ranchers to sell off cattle herds due to lack of water. Jobs could dry up along with the water that supports them.”

As for the Water Data Act and its provisions to make information on water availability more available, Herrell said this would improve future planning efforts as drought conditions in New Mexico and the American West continue to worsen.

“Ensuring that federal agencies adopt coordinated standards for reporting water data will enable states, tribes, and local communities to more easily access this information, which is vital during the severe drought conditions in New Mexico is currently experiencing,” Herrell said.

“This same collaboration will be necessary across the West as major water sources, such as the Rio Grande, are strained due to dry conditions.”

Heinrich, who Sponsored companion bill the Water Data and Security Act in the Senate, said better data and information on New Mexico’s water availability was “critical” amid the impacts, he said, of pollution and subsequent climate change.

He said the bills would combine with funding from the recent Infrastructure Investment and Jobs Act, a signature bill pushed by President Joe Biden and Signed into law Nov. 5, 2021, to deploy federal resources to fight drought.

“In the face of threats from the climate crisis, it is critical that we unite our efforts to protect our most precious resource – our water,” Heinrich said. We’ve made historic progress on funding water infrastructure projects through the Infrastructure Law.”

Both bills saw support from conservation groups, who argued the action was needed to address water scarcity and pollution.

“As the nation continues to face expanding drought and emerging contaminants such as PFAS and PFOA, the role of water data is playing a larger role in how we combat these challenges,” Snelten said.

“The Water Data Act will give groundwater scientists and contractors the information they need to take on today’s water challenges and keep providing water to families and farms across the country.”