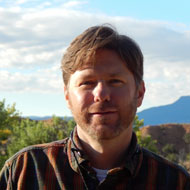 Good morning, my name is Mark Allison, and I am the executive director of New Mexico Wild.  New Mexico wild is an independent, statewide, grassroots, organization dedicated to protecting New Mexico’s lands, waters, and wildlife with thousands of supporters throughout New Mexico and beyond.  We have been working to protect the greater Chaco area for over a decade.  I want to thank you for hosting this meeting and for the opportunity

to make comment today about why protecting greater Chaco is necessary and urgent.  And I thank Secretary Haaland for her leadership proposing this administrative mineral withdraw in this one-of-a-kind and sacred place.  On behalf of the staff, board of directors, and our members, I stand in strong support of the proposal.

Over the years, we have seen oil and gas activity on public lands creep steadily closer and closer to Chaco Culture National Historical Park.  Surrounding the Park are some of the last remaining blocks of unleased federal land in the Farmington Field Office. Chaco and sites in the surrounding landscape are part of the Chaco Culture World Heritage Site. This is the only such site under the care and protection of BLM.

In recent years, and in response to encroaching oil and gas activity, the All Pueblo Council of Governors has repeatedly called on the federal government to enact stronger protections for the Greater Chaco Landscape. In particular, APCG has requested that minerals on federal lands within approximately ten miles of Chaco be withdrawn from future oil and gas leasing.

For some historical context and for the record:

It is estimated that the northern portion of the proposed protection area alone has over 4,000 archeological and cultural sites.  While humans have had a continuous presence here for time immemorial, the greater Chaco landscape constitutes a living cultural landscape of great spiritual significance to the Puebloan and Dineh people today.

Recognition and respect for this fact alone justifies and demands that protections be put in place so that this continuing threat of desecration can be removed.

And there are many other reasons to enact this mineral withdrawal:

New Mexico Wild is proud to stand in solidarity with the All Pueblo Council of Governors and their leadership calling for protections.  This withdrawal is a crucial step toward providing the Greater Chaco Landscape the protections that it deserves.

We are also supportive of the broader “Honoring Chaco” Initiative and are eager to see BLM and the Bureau of Indian Affairs engage with Tribes, impacted communities, and other stakeholders to build collaborative management frameworks for the landscape towards a sustainable future for the region.