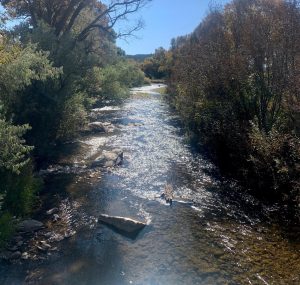 New Mexico’s rivers have been slowly drying up in a drought that has now seized much of the state and halted most farming for the middle Rio Grande Valley. Now one of the state’s rivers faces a new threat: mining. According to a new report by the environmental advocacy organization American Rivers, the Pecos River in northern New Mexico is now one of the most endangered waterways in the United States. The America’s Most Endangered Rivers report lists rivers that are at a crossroads, where key decisions in the coming months will determine the rivers’ fates.

Where Does the Pecos Start?

The Pecos River headwaters start in northern New Mexico and meander down through the state, flowing 926 miles into the Rio Grande in Texas. The word “Pecos” is a Spanish word derived from the Native Towa language, which refers to the Pecos Pueblo people. The river was also historically referred to as the Río Natagés by the Mescalero Apache Tribe of southern New Mexico for the lower portion of the river. According to frontier folklore, the first European to cross the Pecos was Spanish conquistador and colonialist Francisco Vazquez de Coronado in the mid 1500s. The Pecos Pueblo quickly became a trade epicenter for the region in the late 16th century. The river is considered sacred to the Indigenous Pecos, Jemez and Tesuque Pueblo people.

From 1927 to 1939, the Terrero Mine and its mill near the Pecos River in San Miguel County were among the most productive lead and zinc operations in the United States. As with so many other abandoned mines around the state, toxic waste was left behind once the mine closed, resulting in an environmental disaster waiting to happen. That waste contaminated the Pecos River, killed thousands of fish, buried Willow Creek and led federal environmental officials to declare the area a Superfund site. The Environmental Protection Agency spent millions cleaning up the area and the river. In 1990 Congress voted to add more than 40 miles of the river to the National Wild and Scenic Rivers System.

In 2019 Comexico LLC, a Colorado subsidiary of Australian mining company New World Resources Ltd., proposed the Tererro Exploration Project. The company says it plans to mine more than 5,000 acres, drilling up to 30 holes, 4,000 feet deep, in search of ore for metals like copper, zinc, lead and gold. The area that would be mined is just over seven miles. The company says it doesn’t plan to process any materials on site. The project would be the largest mine in the area since the 1930s. The application encompasses an area of the Santa Fe National Forest near Terrero, a small farming community of about 3,500 people. The Board of Commissioners of San Miguel County has already passed a resolution in opposition to Comexico’s application. Comexico’s application remains pending before the New Mexico Mining and Minerals Division.

Local environmental groups like New Mexico Wild have opposed the operation, referring to it as a “nail in the coffin” for an already beleaguered river. “The river’s presence on the 2021 Most Endangered Rivers report emphasizes just how critical it is that we act now to protect it before it’s too late,” said Mark Allison, New Mexico Wild executive director. “The surrounding communities have fresh memories from the devastation wrought by past mining activities that polluted the river, killed tens of thousands of fish and severely damaged the area’s outdoor recreation economy for decades.”

Governor Lujan Grisham wrote a letter to the head of the U.S. Forest Service in 2019 saying she was “deeply concerned” about the mining project’s potential impacts on the environment. “After a long and expensive cleanup, which has already cost $36 million, and elements of which are expected to continue for the foreseeable future, the Pecos Valley has rebounded, and is now of great environmental, economic, cultural, historical and recreational importance to New Mexico.”

Community advocates and stakeholders called the Stop Terrero Mine Coalition are calling for the state Mining and Minerals Division to deny the exploratory mining application and are urging the U.S. Forest Service to assess the environmental impacts of the mining proposal. They also have asked state lawmakers to pass legislation to permanently protect the river. The coalition’s advocacy has resulted in the Santa Fe National Forest requiring an environmental assessment of the operation after initially declining to do so.

“Mining activities from 1927 to 1939 in Tererro is what drove my ancestors away. They knew that the water was not good and was killing them,” said Joseph “Brophy” Toledo, member of the Jemez/Pecos Pueblo. “We find this activity later on in history too, and today we find species in peril along the Pecos River due to drainage from the Tererro mine and the contaminants that are still in the water. Our medicinal properties are being uprooted because of this,” he said.

“Some places should be off-limits to risky mining projects, and the Pecos River is one of those places,” said Sinjin Eberle with American Rivers. “This river is far more precious for its cultural, historical, economic, ecological and recreational values than for the potential short-term earnings that might be derived from destructive mining.”

This article originally appeared in The Paper.