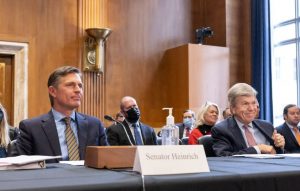 An effort led by New Mexico’s senior U.S. Sen. Martin Heinrich to unlock federal funding to help recover endangered species in the state and across the country passed the U.S. House of Representatives Tuesday and now awaits a vote on the Senate Floor.

After passing both chambers of Congress, the Restoring America’s Wildlife Act (RAWA) would go before President Joe Biden to be signed into law.

The House passed the bill on a 231 to 190 vote, and in the Senate it was last passed out of the Senate Committee on Environment and Public Works.

It would appropriate about $1.3 billion in federal funds to support the conservation of about 12,000 species either listed as endangered or threatened under the Endangered Species Act or otherwise designated as at risk of extinction.

Another $97.5 billion, via the bill, would go to Indigenous groups and Tribal nations to fund wildlife conservation efforts on about 140 million acres.

It would also require recovery plans be directed by State agencies and designate fees and penalties from environmental violations to help fund the bill’s provisions.

It could also mean funds for work to restore the Mexican gray wolf to its historic range, and accelerate decision making for the dunes sagebrush lizard for which petitions and lawsuits were filed in recent years to see it gain federal protection.

He said it garnered support from both Democrats and Republicans.

In the Senate, records show, the bill had 35 cosponsors on both sides of the aisle including U.S. Sen. Ben Ray Lujan (D-NM) while the House version had 194 cosponsors including New Mexico’s Democrat U.S. Reps. Teresa Leger Fernandez and Melanie Stansbury.

“Passing RAWA into law will mean our grandchildren will be able to experience the same rich and abundant American wildlife — from bumblebees to bison — that we have been so lucky to grow up with,” Heinrich said. “I’m so proud of the bipartisan leadership and widespread support that is moving the Recovering America’s Wildlife Act forward.”

In the House, U.S. Rep. Debbie Dingel (D-Mich.) served as sponsor and said the bill would support native species and prevent future extinctions.

In September 2021, the U.S. Fish and Wildlife Service proposed delisting 23 species of plants and animals as extinct.

“Without significant a change in the way we finance conservation, more of the animals and wildlife we hold dear to our heart will become endangered,” Dingell said. “We have a conservation, economic, and moral obligation to act in order to protect and recover America’s wildlife for future generations.”

Blunt said the bill’s directive of engaging the federal government with state agencies would ensure recovery plans are tailored to the specific needs of the species and environment it dwells within.

“By encouraging states, territories, and Tribes to make significant contributions to voluntary conservation efforts, we can preserve our nation’s wildlife for future generations,” he said.

Aside from its support in Congress, the legislation was also pushed by conservation and sportsmen groups who said it would help preserve public lands and spaces for recreational purposes.

Whit Fosburgh, president of the Theodore Roosevelt Conservation Partnership said the bill, if passed, would stimulate the outdoor recreation economy.

“House passage of the Recovering America’s Wildlife Act is a defining victory for wildlife, habitat, outdoor recreation, and our economy, because we know that heading off wildlife threats is more effective—and costs less—than taking emergency action,” he said.

“We applaud members of the House for this step today and urge the Senate to take up and pass this bill without delay.”